Welcome to The Mafia World

The story of Scarface 1920 is set in America's most iconic and colorful era. This period witnessed the glory of Hollywood silent films and the rise of sound films, the birth of jazz and tap dancing, the introduction of Prohibition, the advent of illegal bars and gangsters, and more. As a mafia-themed board game, Scarface 1920 perfectly crafts a world ruled by gangster gangs in 1920s Chicago. I have to say that it has the style of Martin Scorsese. Although it is an American board game manufacturer, it has the characteristics of German board game mechanics. Scarface 1920 uses realistic cartoon images to show characters and scenes, combined with various styles of newspapers and magazines of that era, showing the social phenomenon of gangs in the city. In this board game arena, the player will be the leader of one of the four major criminal gangs, to rule the entire underworld. There will be eight actions for you to choose from throughout the game, namely stockpiling and buying (alcohol and guns), the underground world (increasing crime), managing authorities (reducing the number of gang crimes, controlling criminal activities, exchanging items, etc.), dispatching personnel (Patrol the block), mobilize (move your minions and vehicles), annex blocks (select adjacent blocks to attack), gang upgrade, remove minions. Through these activities, you will gain money, and power, to expand your gang influence and control the world. Of course, there is also justice in this board game design, and federal agent Eliot Ness will lead the federal police to carry out a strike against all gangsters at a specific time. There are unboxing vedio on our cases. 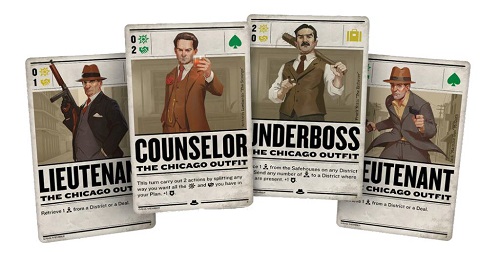 The board game production of Scarface 1920 is done by Eastar. Its board game accessories mainly include customized board game cards of various functions and types, character and building models, and customized markers. Among them, cards are the main props in the whole game, and there are more than eight types of cards in total. The plastic miniatures in Scarface 1920 are painted in four colors: pink, yellow, blue, green, and gray, which can clearly distinguish the characters of the four camps. And it's not only the characters but also the painted models of houses and cars. There are also some additional unpainted expansion miniatures, as well as some other expansions like plastic game rings with themed features. The most special accessory in the Scarface 1920 is the custom gametrayz trays, which are designed with grooves for placing various parts, which can easily and quickly store all the board game pieces and can also display the card deck dimensions. In the manufacture of game components for Scarface 1920, there are many expanded parts of special board game materials, including linen and metal. Hope you can enjoy the custom board game pieces made by Eastar and discover more surprises during the game.

If you also have excellent board game inspiration and want to make it a reality, Eastar will do its best to help you make it happen! If you want to know more about board game production, you can click here.