Everything You Will See in the Space World

You will be able to see all kinds of dazzling electronic devices in sci-fi movies, and space scenes full of planets. To a certain extent, this reflects the technological fantasy of human maturity. Iss Vanguard brings sci-fi themes into the real world of board games. As we all know, the generation of fantasy is the first step in the development of technology, and many contents in Iss Vanguard have transcended the limitations of time and space. In this world, human beings have become the masters of the universe and will share all the top technologies and build their own International Space Station. In this era, we have been able to use the wreckage of alien spaceships for technological innovation. And our main way of promoting the game is to get more resources through exploration, and then arm the space station that we have. Therefore, it is also a board game with resource exploration as the main competition method. Of course, it's also a dice-focused game. The luck of the dice plays a large part in the board game mechanics of Iss Vanguard. Therefore, it has to be said that it has great opportunities to a certain extent, and it can also bring huge surprises to the winning players. The innovation in the mechanism of games with a large proportion of dice is also a test for game designers. Iss Vanguard is successful, and the reform of the dice reward and punishment mechanism has helped it gain more recognition from players. 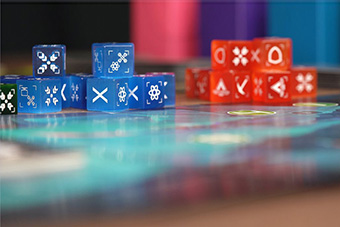 The painting style of Iss Vanguard is very flexible and diverse compared to many other board games of the same type. Compared with the "dark wind" of some similar-themed board games in Awaken Realms, it looks more "sunny and positive". Its cards use white as the main background tone of the picture, and at the same time show the characters in a realistic style. The images in the atlas also focus on creating splendid space environments with rich color effects. 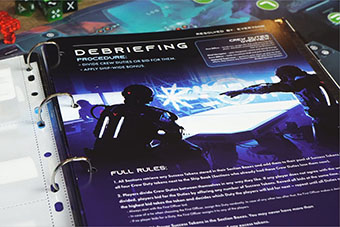 Eastar, the board game manufacturer of Iss Vanguard, uses a high standard of color proofing and die-cutting on all paper products. Especially the production of the special card version in Iss Vanguard. It is crafted to display the important information on the card through the hollow card effect. Of course, the board game components of Iss Vanguard include a wealth of board game expansions, and many new changes have been made for convenient storage. It can be seen from our cases that there are a large number of cards in its game accessories, so it has prepared a variety of ways to store cards. Among them are binder-style card books, sleeves, and custom magnet boxes for card holders. All miniatures are lacquered and vary in color and finish. Of course, one of its most important board game parts, the dice, is made of crystal-like colored clear acrylic. The most special thing is that it also has cute section pets and dice tower specially designed for dice. This can be used not only as board game pieces or as a table decoration. In addition, the expansion of Iss Vanguard also includes specially designed comic books and posters, which are of exquisite quality and high collection value. In particular, Iss Vanguard's miniatures are also available in lacquered colored versions, thus adding a lacquering process. There are two lacquering processes here, one is frosted and the other is metallic. In addition, magnets are added to the production of card holders, which is more convenient for holders to open and close.

Eastar tries its best to realize the customer's design. If you also have a great board game design, Eastar can help you make it happen! Learn More>