Nemesis is a semi-cooperative sci-fi horror board game that gives you a cinematic experience. The backstory of the entire game is set on an alien planet. In this world context, asteroid mining is booming, and both Venus and Mars have become self-sufficient. And "we", as human beings with different identities in this world, are about to face various threats from various alien invasions. In previous articles, Nemesis Lockdown has been introduced, which is an independent expansion board game of Nemesis. The graphics styles of these two games are of the same type, and the richness of board game accessories and the production process are roughly similar. But the difference lies in some game mechanics and the story background. This time, I'll wrap it around all the board game parts starting with the unboxing video.

Let's first look at the content of the core box of Nemesis. There will be a simple game introduction and content introduction on the back of the box. Open the lid of the board game box and the first thing you will see is a beautiful and informative manual. It describes the rules of the entire game in detail. Then, the room sheet will tell you all the room settings, including the difference between each room and the special room. On the hero tray that players get before the game starts, you'll see various action modules as well as personal health and reserve status. There are five hero trays in the core box of Nemesis, namely Captain, Pilot, Scout, Soldier, and Scientist. Different characters will be assigned different abilities and their strengths and weaknesses. Next are tokens of various textures, some of which will have numerical labels on the cardboard tokens to correspond to the item values on the map. Of course, there will also be transparent acrylic tokens in Nemesis, representing different items, helping players mark some of the items they have gained or lost. As a high-end board game, Nemesis must also have its characteristics in miniatures. There are quite a few beautifully crafted miniatures in the main box. All Nemesis miniatures are crafted with great attention to detail, making them look stunning. Of the cards, each has a sci-fi color pattern, and almost all cards are gradient colors. Also, it has uniquely designed cards, slot them into the scanner, and you will be able to detect whether it is contaminated. Finally, there is a cardboard map with a size of 84*56cm. It was originally a folded cardboard, but after opening it is very complete and has almost zero gaps. In addition to the core box, the rest of the expansion boxes of Nemesis also have board game components of the same quality. Open the Aftermath expansion and you'll get more android hero trays and android starting items as well as relatively brightly colored crew tokens and secret objective cards. In addition, there are ten small miniatures. The most special is a white sand timer. In another expansion box, the void seeders expansion also comes with a manual, some delicate cardboard tokens, small miniatures, and cards. The carnomorph expansion is an expansion that adds more new mechanics to the whole game, mainly more monster miniatures And cards. Finally, the terrain expansion, this box is relatively simple, mainly the miniatures of each building, which can turn the flat map into a 3D model. There is also a specific expansion on Kickstarter, where you will get a new character: Medic. And a new character board and a new character miniature will be attached. Other additional expansions include a script comic book and an art book. You must be dazzled when you have all the Nemesis board game parts neatly laid out on the table, but at this point, you must also have more urges to get involved in the game. 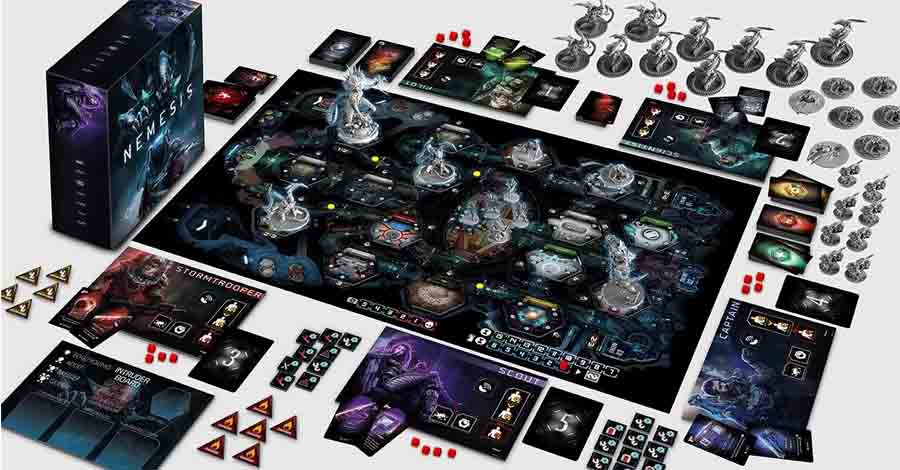 Easter have been honored to collaborate with Awaken Realms many times, and to be the board game maker of Nemesis. In this project, we have also made a lot of efforts to more perfectly realize the customer's design requirements. On the one hand, in Nemesis, the hardest part is the printing of the cards. The pattern in order to realize the sci-fi color of the space environment and the realistic character image, almost every small pattern has a variety of color changes. Especially in the part where the details are displayed, the difficulty of color correction will be greatly increased. At the same time, in order to meet the consistency of the gradient colors on the cards, the precision of the die-cutting machine is extremely high, so there will be a relatively high scrap rate. On the other hand, it is the production of scanner cards. In the part of detection of contamination, the customer designed a unique development scanner card, when you slot it into infection scanner, the text will appear. When we make the scanner, we must make the gap size most suitable for the width and thickness of the card, so the amount of glue is extremely important.

In the field of board game manufacturing, Eastar adheres to the principle of customer demand and constantly breaks through itself. We will come up with more and more advanced technology and professional attitude to cooperate with customers to turn more high-quality board game design fantasy into reality. Thanks to Awaken Realms for recognizing us, and we look forward to cooperating with more excellent board game projects in the future. If you also have great board game designs, please contact Eastar and let us help you bring your designs to life!