Why The Edge Had Been So Popular Till Now

This time I will introduce a famous board game The Edge: Dawnfall v1.6 from Awaken Realms. I believe that the biggest feeling this board game brings to all players who are familiar with board games should be the huge content of parts. It has to be said that this board game components contains is indeed very rich, and it can even be said that few other board games can surpass it in the number of components. But if you don't buy it because of its expensive price, then you will miss out on such a collectible board game. On the one side, in terms of game mechanics, it is worth playing. There are currently three confrontation suits and three separate story backgrounds. Change your own resources and abilities by controlling and occupying the opponent's city. The development of each war is unique and can be used to change the map with stickers based on the outcome of the battle, updating the overall world view. Another special point is that the dark forces that players need to fight against are not controlled by players, but are managed by the AI card that comes with the board game, and the script is also independent. On the other hand, for the war system in the game, each army can have the ability to attack, defend, and move. Decide whether you gain or lose by the number of unit ability points and the size of the dice. At the same time, the magic stone mine on some map tiles can also enhance your abilities. It is worth mentioning that its has less rule book and other text content that needs to be understood, so it reduces the understanding process of many complex game rules. 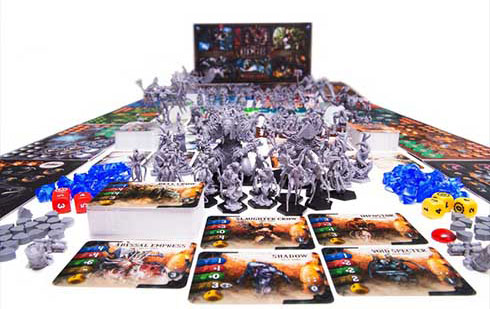 What I want to introduce next is the abundant contents of The Edge: Dawnfall v1.6. All parts are impeccable, both quantitatively and qualitatively. That's the reason why it's expensive. You can see from the YouTube unboxing video that the whole set is full of seven boxes, and it is also mentioned on kickstarter that all the contents exceed 9kg! There are nearly 600 cards, along with 9 campaign maps and 12 stickers. There are also more than 400 tokens made of various materials, among which the materials are divided into cardboard, crystal, wooden and plastic. The most worthy of collection must be its miniatures. There are 113 miniatures with highly detailed, their material is unpainted hard-plastic. The details are impeccable, and each model is checked manually after demolding to ensure the integrity of each model. In addition, its expansion box also has exquisite models, mainly miniatures of various dark forces. It also comes with new cards and tokens. Eastar, as one of the manufactures of The Edge: Dawnfall v1.6, is glad that it has been loved by many board game fans. Eastar is striving to become the best board game manufacturer in China and a global leader in board game manufacturing. We are honored to have many collaborations with Awaken Realms and are very fortunate to be recognized by Awaken Realms. Eastar is constantly striving to improve its production strength and professional service capabilities, and expects to cooperate with more excellent board game projects in the future. We also look forward to becoming a better board game dream maker and turning more excellent board game design inspiration into reality. Learn More>

BACK TO LIST
Prev：Nemesis: Expectations vs. Reality
Next：The Shocking Revelation of a 3D World in Dungeon & Town