The story of King Arthur and his knights of the round table probably satisfies the fantasies of all those with heroic dreams. King Arthur is the founder of the Knights of the Round Table, but unfortunately, at the end of the story, he disappeared on Avalon Island. Some say he's dead, some say he's still alive, but he must be the most legendary figure in Britain medieval fame. Now I want to say that King Arthur is back with his knights of the round table! We're about to set off to find the Holy Grail that they lost in battle! This is a board game with high beauty and magic, and it is also the representative work of Awaken Realms in Poland, known as the "peak of American board games" - Tainted Grail: the Fall of Avalon. 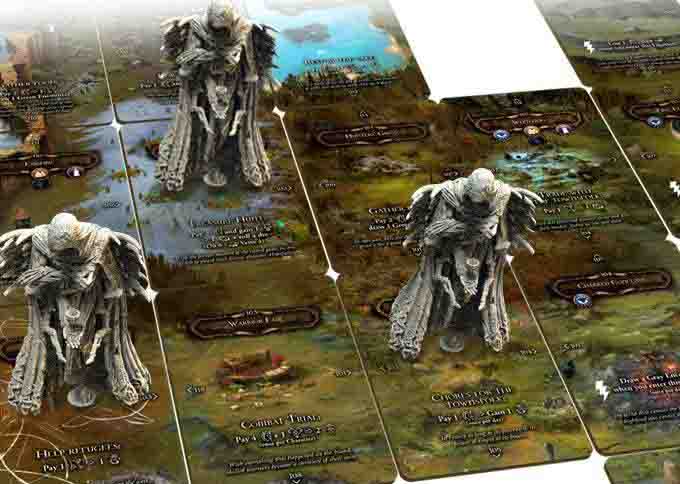 I have to admit that Tainted Grail, a series of board games, has won a lot of attention with the legendary story of King Arthur. And about the most mysterious part of the story, Avalon - it makes players' expectations explode. Living up to everyone, it eventually raised over $6.2 million on Kickstarter from 42,000 backers. One of the top ten games with the highest fundraising since kickstarter was established. And one of the biggest features of its success is that its rich storyline increases replayability. You can learn from the unboxing video, Tainted Grail: the Fall of Avalon is not so much an adventure board game as it is an adventure storybook with 100,000 words and a full narrative epic. Its script has 15 chapters, each of which can vary in length and storyline. In this world, the five of you players are neither King Arthur and the Knights of the Round Table nor the five luminaries in the village of Avalon who went to find the Holy Grail, but the ones who were sent to find them. Each of you has a story of your own past, ordinary yet special. First of all, in the context of such a new world view, the choice determines the development direction of the game. Maybe some choices are just innocuous little things, but more will affect the development of the following chapters. Or when you trigger a small event and think that it may be just a small branch line, but after two or three chapters, you will suddenly find that it will directly affect the development of the main storyline. Second, being able to bring yourself into the character. Each character will have a full and rich life, and they will each be apprentices to five luminaries. When you find your mentor, additional plots will start, and each member's plot is different but will also surprise us! Finally, there is the character memory fragment worn in the game - Echoes of the Past. Here you can read the relevant memory of the character by triggering special events, and each character can have ten pieces of memory. This is very similar to the recording method of interludes in dramas, and shows the crisis existing in the big environment through small characters. This is very much like what Chekov said "Show, don't tall". Letting the player experience the character's state of mind is far more than a simple story description.

In addition to the game plot, but also to mention its operation. You can see, unlike many board games that are complex enough to take a long time to learn the rules, the operation mode of Tainted Grail: the Fall of Avalon is clean and neat, and it is enough to understand all the gameplay information only through the rule book. When encountering an enemy, you need to choose combat or diplomacy. However, many players reported that the loss of escape and punishment is far less than the loss of health value caused by failure of the battle. At the same time, there is also the tasteless feeling of erecting a monument. You may spend a lot of resources building monuments, but you won't get much benefit from them. Different from their thoughts, some players may think that battles and monuments are representatives of heroism and cannot be abandoned! At the same time, players can also experience more immersive animation scenes and sound effects through the script assistant app, making the game experience more perfect!

Next, I'm going to talk about the most exciting unboxing experience. Tainted Grail: the Fall of Avalon will not let you down. Awaken Realms chose Eastar, the best board game manufacturer in China, to complete this project. Eastar has accumulated extensive experience in the board game manufacturing field and has also worked with Awaken Realms for several years. Whether it is the advanced level of board game production machines or the selection of materials, we all adhere to the tenet of high quality and high satisfaction. When you open the exquisite board game box, you will see a 220-page exploration journal, a rulebook, an open&play guide, some intro letters and 4 paper adventure map. In addition, there are many save sheets for easy storage of records after finishing, and quicksave insert. The character board is made of double-layer board and placed on the plastic board game box lid. Open the plastic board game box, there are hero models and more than 400 cards, as well as plastic components, including various markers. The clear printing and evenly colored models will definitely make you feel that the price is worth it!

If you were the fan of King Arthur and the Knights of the Round Table, if you also had a heroic dream, if you were also curious about board games or are already a senior board game player, you must not miss Tainted Grail: the Fall of Avalon! I believe that more and more people will come to the world of board games to experience the sense of achievement and excitement brought by board game battles. We also look forward to more board game design companies to cooperate with Eastar to jointly create more high-quality board game products to meet the requirements of more players with different needs!