The Latest Trend in The Great Wall

When it comes to board games, what is the first thing that flash into your mind? Is it the name of your favorite board game? Is it a well-known board game company? A dazzling tabletop covered with parts around a group of friends? Or is the brain blank and you can't think of anything about? I believe that many senior board game players have come into contact with some hard-mode board games. The intricate and extensible plots always requires players to spend a lot of energy to study some rules and hidden gameplay. It's probably a lot of fun, but it's not good for new board game fans. Especially in some parties, board games that are difficult to get started are not favored by everyone. Therefore, I believe that The Great Wall board game must be very friendly to novices. It was published by Awaken Realms (AR) in 2021. As we all know, AR has a very high status in board game circle today, and it is agreed that "Anything produced by AR must be high-quality". Therefore, The Great Wall has also received more attention due to the popularity of this AR. The difference is that most of the past well-known board games in AR are American board games, known for their rich and complex stories, but The Great Wall is a German board game that focuses on strategic elements. 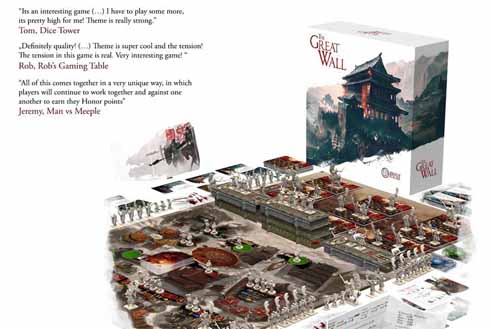 The Great Wall is a great and legendary building known as the first military project in ancient China. And this board game also fully reflects the military defense mechanism of The Great Wall. Combining the videos on YouTube, we can see that it is based on historical facts and combines fantasy elements to construct a picture of "Song Dynasty generals stick to the Great Wall to resist Mongol invasion" on the desktop. The whole game style combines the impression style of ink painting with the realistic style, creating a strong "Oriental epic" atmosphere. Which can support 1-4 players to join, it takes 2-3h. Players play different clan factions, which is an artificial placement game driven by cards to promote the game process. Among them, the year and seasons are transformed as the timeline to obtain resources, build fortifications, resist foreign enemies and other activities to obtain honor points, and the player with the most honor points in the end wins. The entire game begins in the fall, harvesting resources, and deploying invasions. In winter, the clerks can be dispatched into various departments through the command card according to the tea ceremony order to obtain corresponding effects. There are five departments, namely the resource department, the strategy department, the tea ceremony department, the defense department and the military department. In the spring, the settlement of the battle results in the city wall area began. Each occupied clan card is considered to be successfully defeated, and the player who provides the most combat power will receive the card's honor points, and the clan that does not provide combat power in the breached area will need to be punished. During the summer, resources on the field will begin to be reorganized and a new round of deployment will begin. The player with the most honor points at the end of the final year will be the final winner. On the whole, all the rules of the game are very clear, but the strategies and details of each link need to be carefully considered by players. Different players have their own different thinking modes, which will directly affect the development trend of the game. I believe that every game has a different taste!

The Great Wall also has a wealth of board game pieces. You can see that various models, including weapons, characters and events, are mostly based on historical facts, but there are also mythical beasts from myths and legends, which symbolize the mysterious power of the East. In terms of production, Eastar, as the most powerful board game maker in China, has a variety of top mechanical equipment, and can restore all custom board game pieces as much as possible according to the designer's expectations. All kinds of plastic models in The Great Wall (characters, Great Wall, refusing horses, defense and attack equipment, etc.) are all made of high-quality materials, and are completed through various processes such as artificial molding, bonding, grinding, and coloring. In the manufacture of board game paper products, there are more than 200 cards in The Great Wall. To ensure quality, its thickness and printing are done by advanced machinery and carefully checked. It will not enter into mass production until the samples meet the customer's requirements. Eastar acts as a responsible dream maker throughout the production chain, patiently listens to customer requirements, actively communicate with customers, and strive to overcome all difficulties to realize customers' ideas. We are very fortunate to be friends with Awaken Realms on the road of board game creation and board game manufacturing for many years and look forward to achieving more win-win results in the future! We also look forward to having more board game manufacturing projects choose to join us.

At the same time, it is expected that The Great Wall can enter the collection library of more board game enthusiasts and be recognized by more people. It is also worth looking forward to the release of the Chinese version of it. For The Great Wall in which Chinese history and mythology and fantasy coexist, I believe that many Chinese board game lovers have already fallen in love with it.

BACK TO LIST
Prev：How to Have a Fantastic Adventure of King Arthur and His Knights of The Round Table
Next：Quiz: How Much Do You Know about Become an Assassin in Board Games