Quiz: How Much Do You Know about Become an Assassin in Board Games

Whether it is a film or a video game, assassins exist in these stories. In justice descriptions, they are always the light in the dark, giving everything for a certain belief or a certain person. So, how much do you know about assassins in board games? Next, I will talk about is a board game about assassins, Assassin's Creed: Brotherhood of Venice. It's based on the popular stealth computer game Assassin's Creed, inspired by Vladimir Bator's novel "Alamut". Therefore, when you open the beautiful board game box, you will see a motto written on the inside of the box lid: Nothing is real, everything is permitted. And this is also the soul of Alamut.

Assassin's Creed: Brotherhood of Venice is an infiltration and assassination cooperative tactical board game designed and developed by indie board game studio Noir Triton, set in the Italian Renaissance. Based on the faithful restoration of the related stories of Assassin's Creed: Brotherhood and Assassin's Creed: Revelations, the designers' own unique style has been added. Its entire gameplay mechanics can be found in detail on our cases. It is a scenario-driven campaign game that supports 1-4 players, and all campaign information is kept in envelopes. The entire game is played in turns, with the toss of dices to determine the course of a series of events. There are 4 phases in each round, they are event phase, assassin phase, enemy phase and end of turn phase. Assassins achieve action through stealth. When stealth, they will have colored mini-rings and gain a wider range of action. When the mini-ring turns red, it becomes the target of the enemy's attack. On the equipment, there are melee weapons, distance weapons, armor, and five inventory slots, the five of which can have additional weapons. Attacks in different areas can be achieved through the use of different weapons. Also display your actions and health through action cubes and health cubes. Just like the origins of the Assassin's Creed stories, the memory of the ancestors is awakened through the blood. Here, the result of the whole game is also the acquired memory to determine success or failure. You may gain memory in action, or you may lose it. At each stage, stickers are required to record the results achieved. When memory reaches 0.4, your villa will be upgraded. In addition, you can also exchange equipment and villas by trading. In Assassin's Creed stories, everything can be created, just like the motto says. 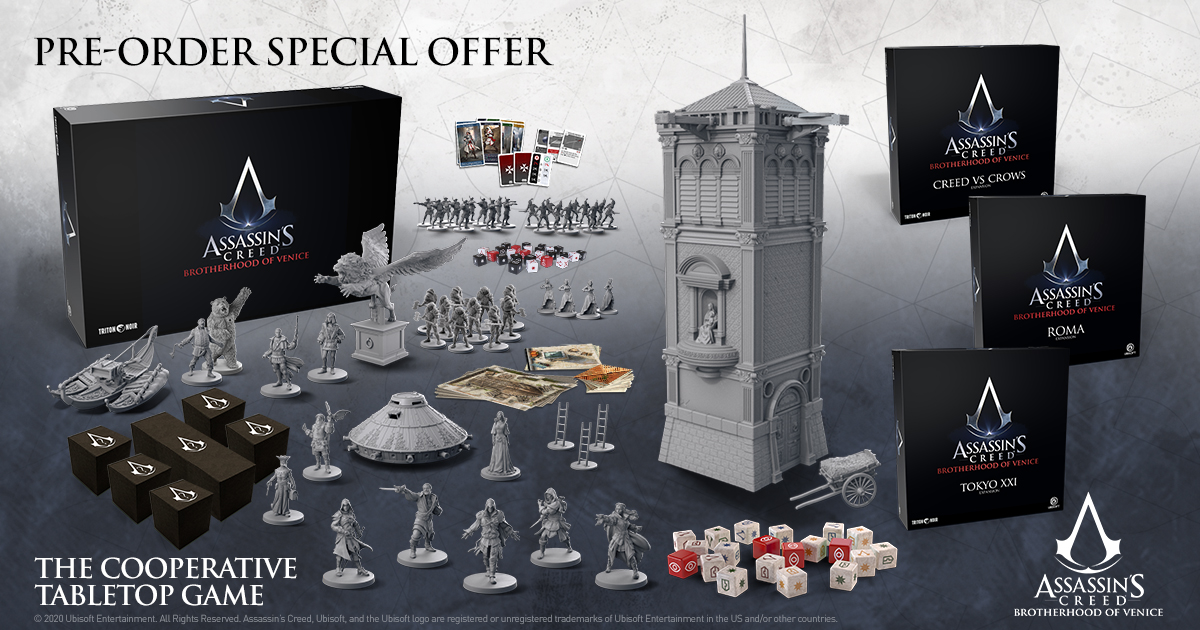 Whether you're watching the unboxing video of Assassin's Creed: Brotherhood of Venice or you've already gotten a preview of it, you'll be amazed at its wealth of board game components. Eastar is the best board game printer, whether it is paper accessories, such as board game boxes, envelopes, cards, stickers, etc., or the manufacture of plastic models, such as minis, architectural models, dices, plastic board game boxes, etc. quality inspection. In each link, relevant departments carry out careful verification to ensure that the products that finally arrive in the hands of customers must be the most perfect. In addition, in order to achieve the design that satisfies the customer as much as possible in manufacturing, the staff of the Eastar business department will communicate with the customer at any time. In terms of transportation, we also ensure as much as possible zero loss during each process. First of all, it is the choice of package. We all choose high-quality board game shipping boxes. Secondly, according to the needs of customers and the distance of transportation, we will choose the most suitable express company for cooperation. Finally, we will follow up after the customer receives the product, solve the relevant problems in time, and accumulate relevant experience to optimize the company's transportation strategy. At the same time, I would also like to thank Thibaud from Triton Noir for his praise of our board game manufacturing and look forward to the next cooperation.

If you are a fan of Assassin's Creed, or you have an assassin dream in your heart, you must not miss the board game Assassin's Creed: Brotherhood of Venice. I believe that every player in the game can become the mysterious assassin in their dreams, and work with their friends to achieve their goals and accumulate wealth. You will also be able to explore more history and culture in the context of the Italian Renaissance. The storage list is also very convenient for players to store after the game is over. I hope every game can bring you a different gaming experience!